Here are 3 stages of storyboard development, from line composition to adding base colors to full rendering with lighting and visual effects. 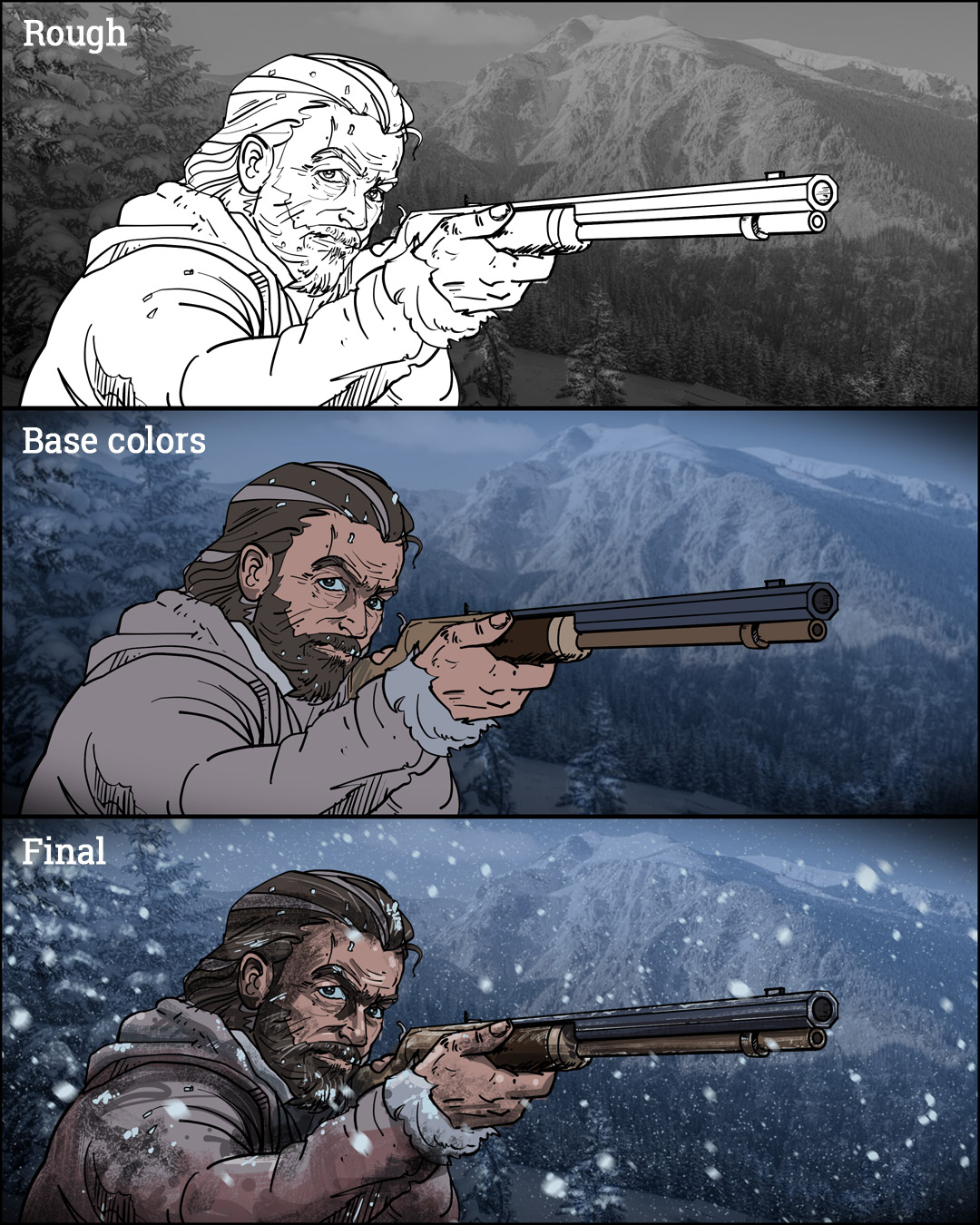 Below are detail sections of the same storyboard. 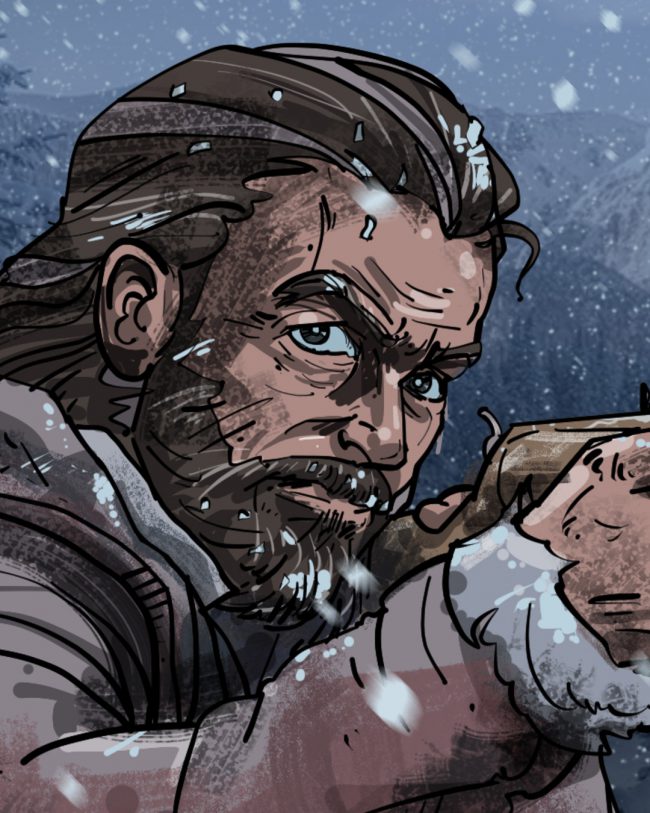 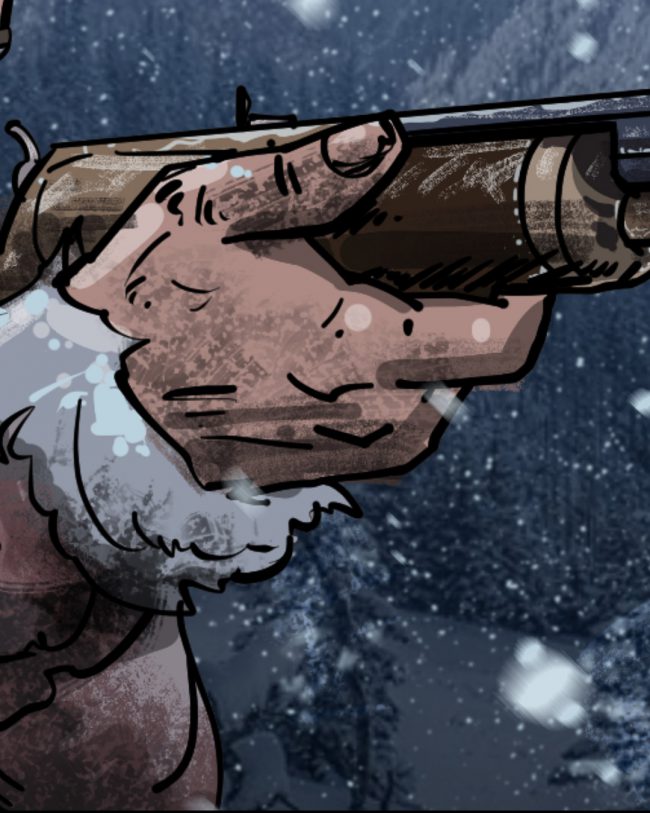 Shot 104A animation: Creature Approaching Sam, View From Behind Creature

Shot 104A animation: Creature Approaching Sam, View From Behind Creature.

This is a quick animatic using one basic storyboard frame drawn with elements on layers. The layers are separated then given separate blur, shakes, position, and scaling over the duration.

Here are the static storyboard drawings with different blurred layers. 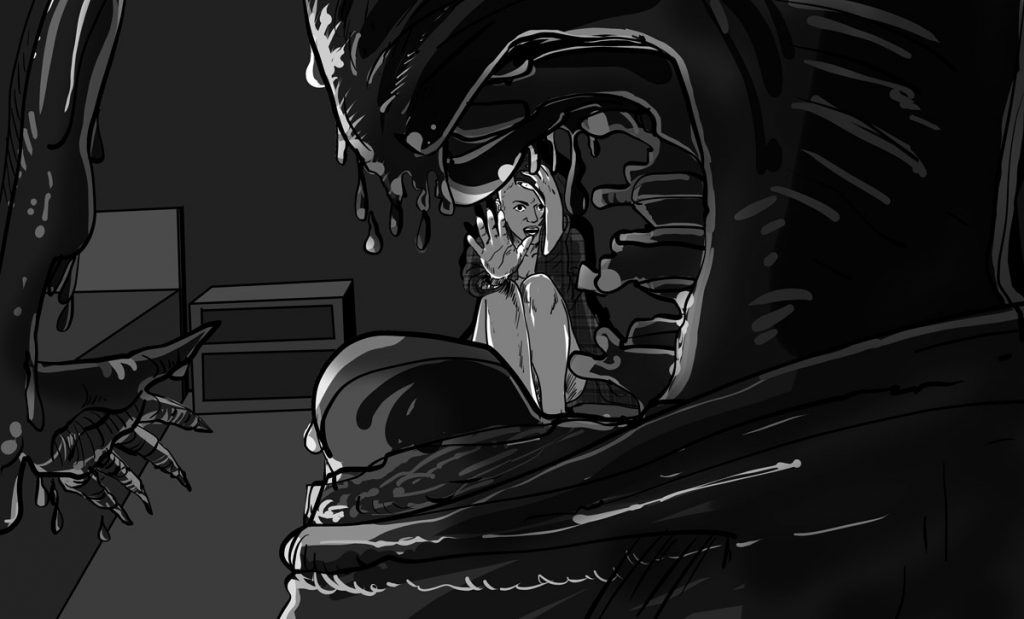 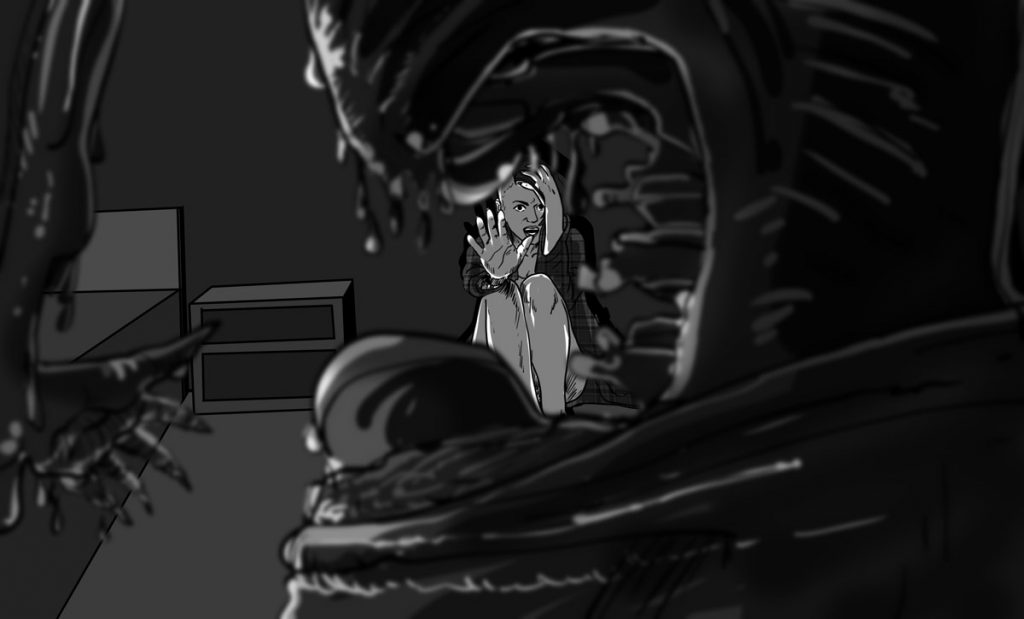 Roughing out another scene: High angle on 2 detectives interviewing the strippers

Roughing out another scene: High angle on 2 detectives interviewing the strippers. 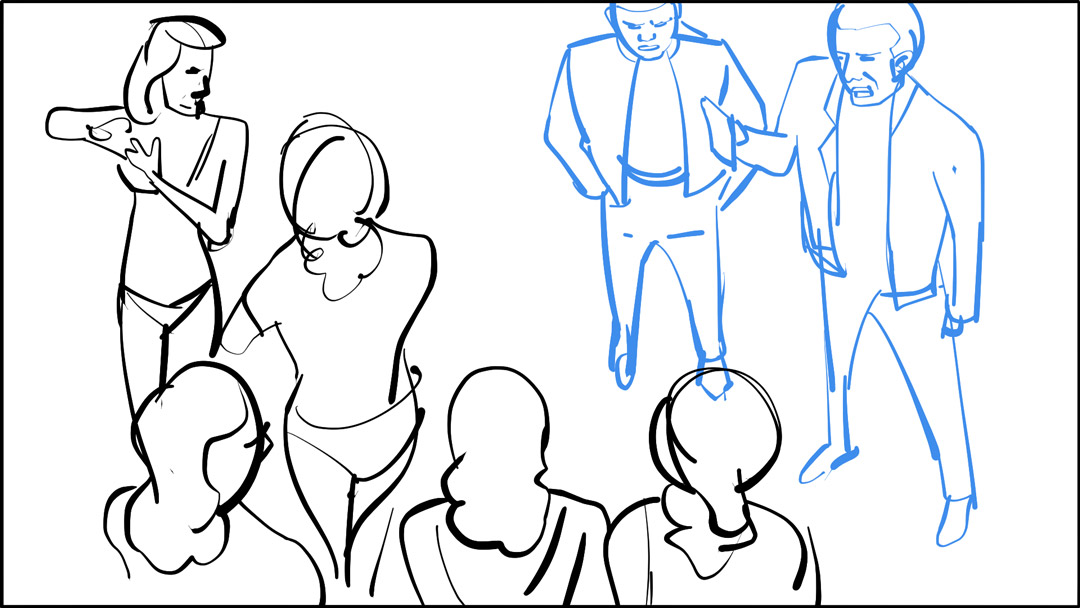 Emma breaks the surface and looks down.
Emma POV to her feet still in the water.
Water explodes throwing her out of the water. 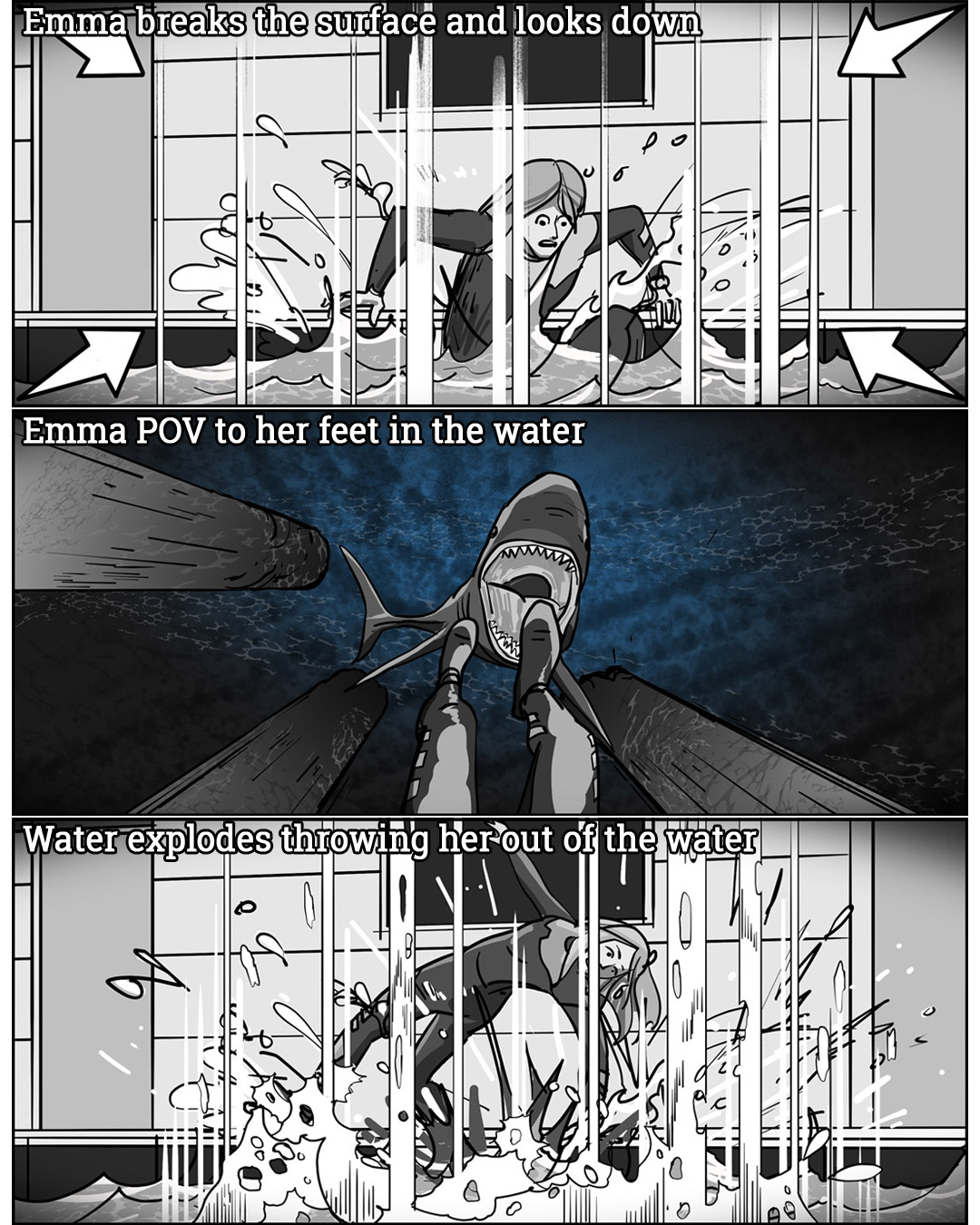 Blocking Out A Shot: Two Detectives

Blocking out a shot: OTS of dancer as the 2 detectives approach and introduce themselves. 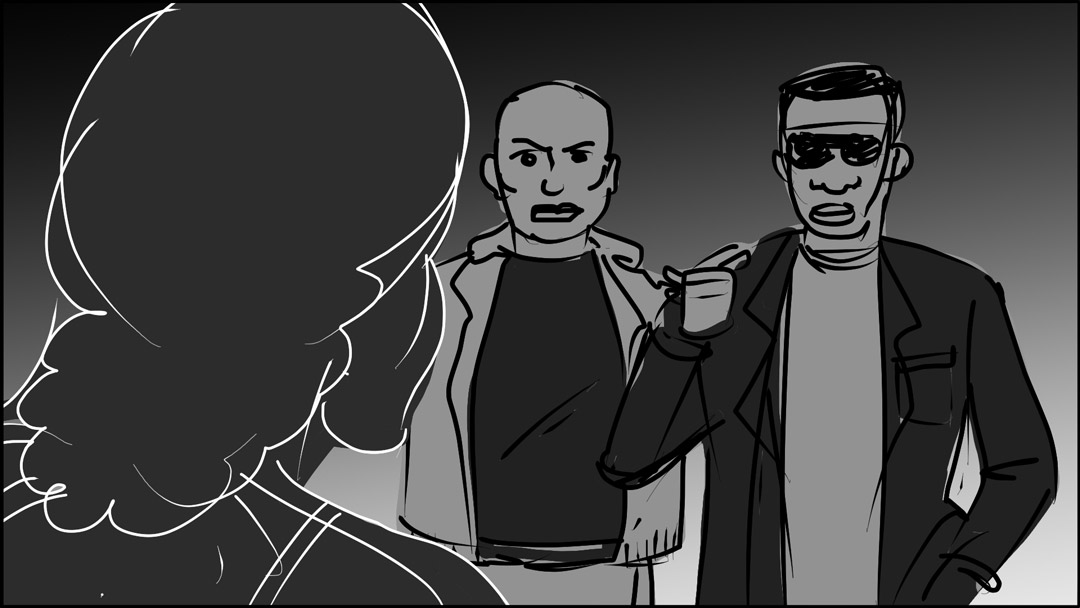 Here’s an expanded version of a 6-foot commissioned wall mural I did recently. The complete scene is now extended at both ends to create mural suitable for a longer wall such as in a restaurant or a public space. Designed for a size of 53 feet long by 10 feet high, it can be used as is for any space with similar 5.3:1 ratio, or I can customize it to work with any size.

Just to have some more fun with it, and for a more immersive experience, I made the short video below to include restaurant noise and the familiar and beloved Saigon street sounds of traffic, mopeds and honking. 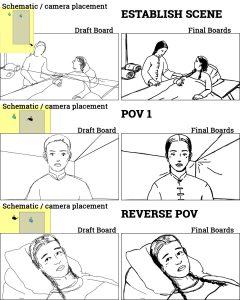 Here’s a series of 3 boards developed to show a scene inside a tent with 2 characters. Each board consists of a schematic (yellow area), a rough draft of visualization, and the final board. Each schematic specifies clearly where the camera is mounted and where the action and scene is taking place.

The first board is an establishing shot at medium distance as called for by the schematic.

The second shot is a POV of the reclining character looking at the character sitting by the bunk bed.

The third shot is the reverse: a POV of the character sitting looking at the reclining character.

Here’s a short animation of a sequence I storyboarded for Hunger Pains.

Mama reaches out toward Sam from Sam’s POV. This is part of a late sequence changes the end to revise the story’s ending. The storyboard was obviously static, but I wanted to revisit it and add some drama with movement and flashes of lightning.

Here’s a quick demonstration of a short scene development for storyboarding. 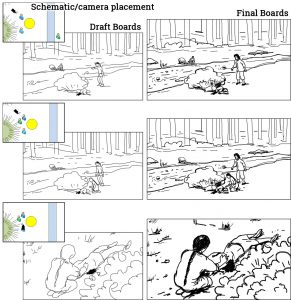 First board: Start on wide shot with Xiang finding Kulya injured in the foreground, behind a bush. Xiang calls out to Liling washing clothes across the stream.

Second board: Maintain shot as Liling crosses the stream and kneels down by Kulya on the ground.

Third board: POV of Xiang looking down at Liling tending to Kulya.

END_OF_DOCUMENT_TOKEN_TO_BE_REPLACED 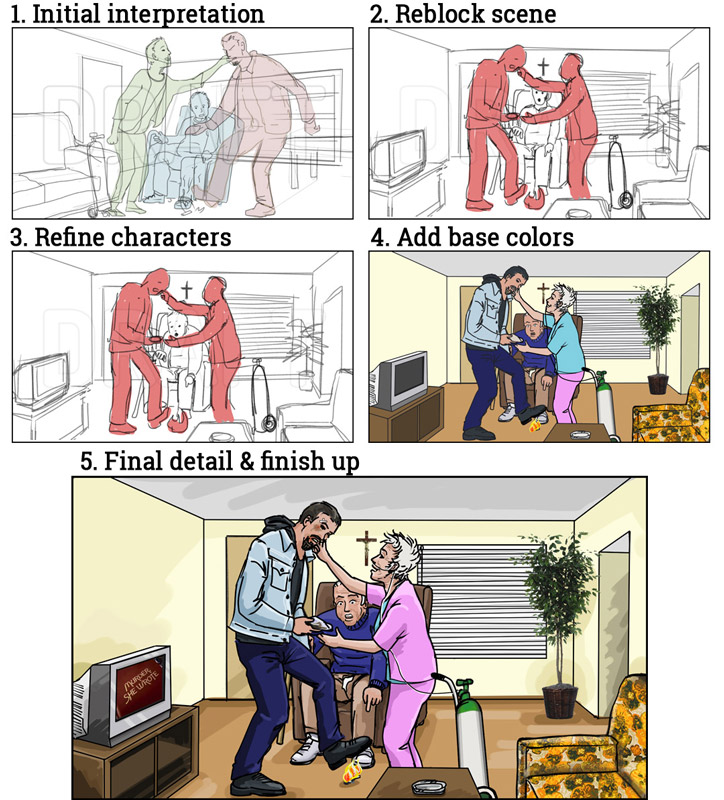 Storyboarding process through story development; collaboration between the writer, director, and storyboard artist; and technical and artistic skills.

The process varies from project to project, depending on client’s workflow and budget.

END_OF_DOCUMENT_TOKEN_TO_BE_REPLACED

Storyboarding With The Rule of Thirds: Blessed Are The Meek, Scene 2 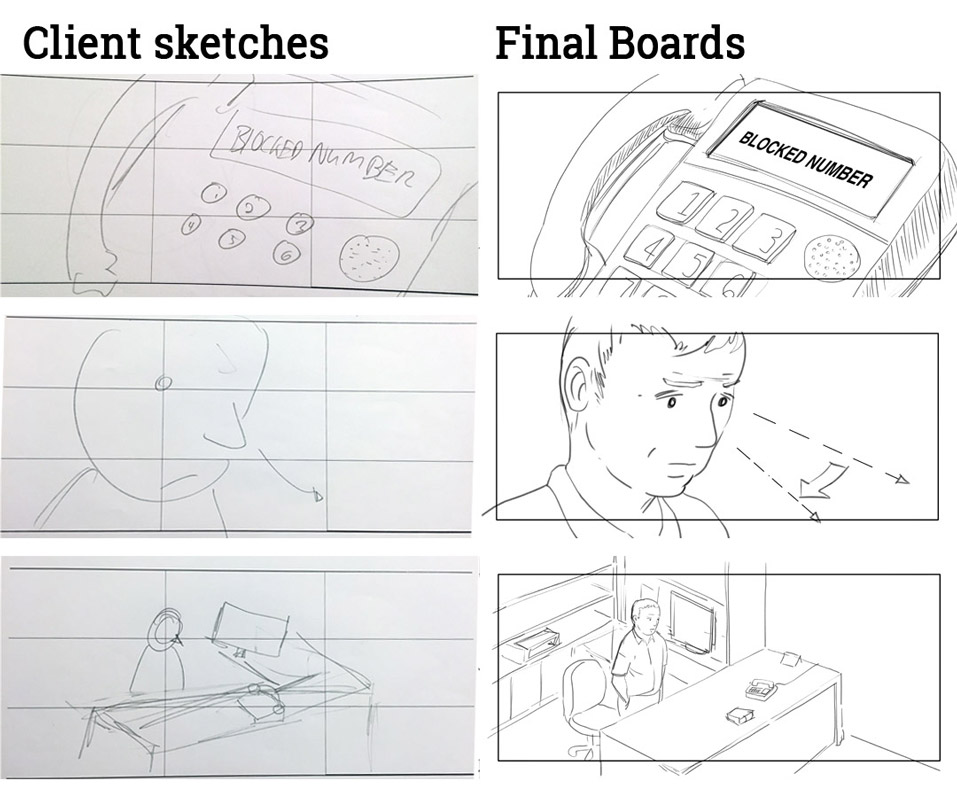 Storyboarding with the rule of thirds and client’s initial sketches versus final storyboards.